Attack on Buddhagaya is an attack on humanity and attack on attacker themselves.Such an act comes from the minds of Illusion,Ignorance and poverty.

We wish, let those people become aware of their unmindfful act of evil.

The evil mind can destroy the whole world, but cannot destroy the DHAMMA whcih is Eternal and Natural law of Universe 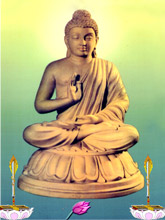