Dhammapada- The truth --------------- by Bhaghavan Bhuddha
The Dhammapada, an anthology of 423 verses, has long been recognised as one of the masterpieces of early Buddhist literature. From ancient times to the present, the Dhammapada has been regarded as the most succinct expression of the Buddha's teaching found in the Theravada Pali Canon of scriptures known as the Khuddaka Nikaya ("Minor Collection") of the Sutta Pitaka. 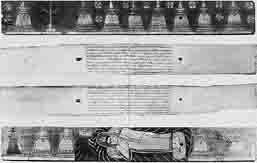 This Dhammapada palm leaf manuscript (44.5 * 6.5 cm) in Sinhalese characters, of which the first and last pages are shown, is believed to be the oldest extant copy of the scripture. Photo: Courtesy of K. D. Paranavitana, Assistant Archivist, Department of National Archives, Colombo, Sri Lanka.

Buddhist tradition has it that shortly after the passing away of the Buddha his disciples met in council at Rajagaha for the purpose of recalling to mind the truths they had received from their beloved Teacher during the forty-five years of his ministry. Their hope was to implant the principles of his message so firmly in memory that they would become a lasting impetus to moral and spiritual conduct, for themselves, their disciples, and for all future disciples who would seek to follow in the footsteps of the Awakened One.

With the Teacher no longer among them, the monks found themselves with the responsibility of handing on the teaching as faithfully as possible. Having no written texts to rely on, they did as their ancestors had before them and prepared their discourses for recitation, that is, basic themes were repeated with variations in order to impress the ideas on their hearers. At that time, according to the Sinhalese, the Dhammapada was orally assembled from the sayings of Gautama given on some three hundred different occasions.

Subsequently, several renditions of the Dhammapada in the Sanskrit and Chinese languages came into circulation. Likewise, a number of stanzas are to be found almost verbatim in other texts of the canonical literature, testifying to the esteem in which its content was anciently held. Since first collated, the Dhammapada has become one of the best loved of Buddhist scriptures, recited daily by millions of devotees who chant its verses in Pali or in their native dialect.

It was inevitable that differences in interpretation of teaching as well as of disciplinary practices would arise, with the result that about a century after the First Council was held a second gathering was called to affirm the purity of the doctrine. It was at this Second Council that the Arhats divided into two main streams, namely, the Mahasanghika or "Great Assembly" and the Theravada or "Doctrine of Elders." These gradually developed into the Mahayana or Northern School of Buddhism espoused chiefly in India, Tibet, China, and later Japan, and the Hinayana or Southern School whose stronghold is Sri Lanka, Burma, and the countries of Southeast Asia.